Web and latin america a recap 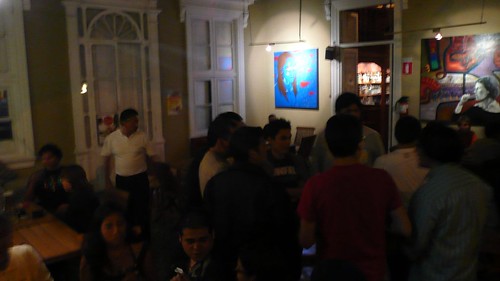 After my blitz trip through lima this past weekend it came to my attention that there is huge amount of underlying potential for the web in this part of the world, but its missing key components needed to grow. I spoke with a number of very intelligent and very in touch people who understand many of the changes going on in the social media and web2.0 sphere, and frankly came away with mixed emotions.

At my first South American Twitter meetup ever, over 40 people were there! Lots of people in this crowd were what we would call the early adopters here. Whereas in the US an early adopter of something like twitter is typically 6 months to a year ahead, there they are 2-3 years ahead of mainstream adoption. The main reason being that the infrastructure (SMS, Telecom, Internet) isn’t there for the majority of the population, and is still prohibitively expensive for many.

But here is what I see that made me really glad to have gone down to peru (from a developer/strategist perspective). There is a large group of people who are genuinely interested in these new emerging technologies, who have great skills in programming and development, and are really just waiting for a great project to come along. There isn’t the same entrepreneurial mindset there is here in the US, but there is a spirit of creativity. I spent hours talking to the talented team behind Prezentit about how to make the greatest twitter experience possible. How we could extend something as simple as the 140 characters of twitter and build a robust community around that social object.

Some of the things that Peru lacks from a web perspective: capital (not that much is needed, things are relatively cheap), someone with the balls to experiment on a number of things and put their $ where their mouth is, and people talking about the community as much as possible. The local paper El Comercio is doing a great job on this last part already (my visit is even mentioned here 🙂 ) There are also a number of cultural issues that can be corrected, especially at the youth level (the same point where much of this development can occur).

I’ll write more in the future about south america and its role in this emerging global network of web development, software, and online culture. But for now I’d like to thank all my new twitter + facebook friends down there. Saludos a todos.